At Progressa, we believe in giving everyone a second chance, not just with their credit. Each year we select five local charities for our Progressa Gives initiative in both Vancouver and Toronto, to support and hold various team building events to raise money.

April is World Autism Month, and with this disorder affecting 1 in 66 Canadian children,  Progressa has teamed up with PALS Autism Society by sponsoring their Annual Imagine Gala! This Gala raises money for the society to support their school, fulfilling their mission “to provide year round scientifically validated educational programs designed to encourage individual growth and personal achievement”.

If you are unsure what exactly Autism spectrum disorder is, and why its an important cause to support,  let us fill you in. Autism comes in many shapes and sizes and can be hard to diagnose. With a variety of conditions characterized by challenges with social skills,  repetitive behaviours, speech and nonverbal communications, this disorder can be complex. Autism touches 70 million people worldwide and is caused by different combinations of genetic and environmental influences.

On April 6, 2019 over 350 people gathered at the Vancouver Convention Centre to support and raise money for the PALS Autism Society. Many of the students from the school attended, and a few of the Autisic students spoke about their experiences and how they were grateful for the support received by the community. It’s inspirational to hear how the school has helped those in need.

“We were told Finn would never learn to read. In his other school, I said I would like him to learn how to read and they said ‘that won’t happen, that’s an unrealistic expectation.’ And when I brought him to PALS they said ‘yes, we’ll teach him to read.’ And he’s learning to read.”– Tara Hodgson, parent of Autistic student that attends PALS.

The PALS Autism School maximizes the development for each student’s communication and language, social, academic and life/independence skills; a program for children aged 5-18 and an adult program for those over 19.

How to Save Money When Shopping Online﻿ 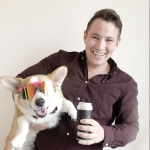 Hey! I’m Rich and the Creative Director here at Progressa.

I love to communicate visually (so writing isn’t my strong suit). You can find me at the office, gym, brewery, or local pizza joint.

Progressa Gives: Walk to Give

Join Us At the 2016 Technology Impact Awards!